Zac Efron has been ripped in peak condition for some time now, here I break down all the Zac Efron Workouts there are to get you lean and beach ready showing off that six pack by the sea!

When it comes to Zac Efron’s body there’s no doubting that he is ripped! In fact the Zac Efron body transformation that took place from ‘Neighbors’ (where he was already in great shape) to ‘Baywatch’ shows just how dedicated he is to heath and fitness and of course acting too!

Zac Efron rocks one of the ‘goal physiques’ I deliver in The Push Ups Program. Are you getting in your daily diamond pushups!?

Since Zac Efron’s 2012 film, ‘The Lucky One’ he has been killing it with the workouts. For this movie he worked with Logan Hood, a former Navy Seal. Zac Efron stated on a TV Chat Show that the workout for this was push ups and pull ups!

This workout built him a well defined back with that mid ‘chest line’ and fantastic arm development, especially his biceps. Get a pull up and dip station and you’re good to go! Pull Ups and Dips are THE BEST bodyweight moves to carve out an incredible body (besides diamond pushups). Diamond pushups only beat them as they are just one movement for pushing and pulling and require no equipment – you can’t beat them for all round effectiveness!

From ‘The Lucky One’ Zac took his workouts and body transformation to another level for his movie ‘Neighbors’ and then ‘Baywatch’. Here I breakdown the Zac Efron Workout from the movie ‘Neighbors’ (you can build this body quick and efficiently with The Push Ups Program) and The Zac Efron Baywatch Workout (which is best built with Pull Ups and Dips along with Push Ups).

For the last few years Zac Efron has been staying LEAN and continuously adding muscle (GENETICS!?) It baffles me how ALL these very talented actors seem to have fitness model/bodybuilder genetics…I mean – what ARE the chances!? I guess it’s only a matter of time before Phil Heath picks up that Oscar, right!?

ANYWAY. Zac Efron (who’s yet to get that Oscar too) has done a great job of building one of the best male physiques out there.

Zac Efron is a big fan of push ups and can often be seen on set dropping to the floor and getting in his push up reps. For the ultimate minimalistic workout Zac Efron likes to incorporate push ups with light dumbbells.

Light Dumbbells can work incredible well when incorporating the principles of the mind muscle connection (MMC) and time under tension (TUT) making the light weight ‘feel’ as heavy as possible. Get your push ups and light dumbbell reps in whilst doing some cardio, whether that be a brisk walk or light jog and you’ll be looking and feeling like a hollywood actor, lean and chiselled.

Try this Zac Efron full body workout three times a week on Monday, Wednesday and Friday for that lean and shredded look.

Firstly in ‘Neighbors’ he is under 10% body fat which means if you have the muscle, it’s going to be poppin’!

To stay true to his character –  fraternity leader/general jock he had to be in great shape with just the right amount of muscle. Too much muscle and we start to think, wouldn’t he be at home meal prepping instead of being at this wild party!? The good news is this Zac Efron Workout is the most attainable of the two, if you can dial in the nutrition and lower your body fat percentage.

The reality is, plenty of gym goers have the body on the right. They’re rockin’ the Seth Rogan.  Most likely they have the body of Efron underneath all the fat. But sure, wearing a regular fitting T-Shirt Zac will look small in comparison. However, Zac’s blood work will be way better AND you’ll enjoy taking your top off on the beach…there’s a reason why Rogan is so white! I’ve been there!

The Push Ups Program is perfect to get you looking like Zac Efron because it’s focus is the ‘V-Shape’. It will build your CHEST, SHOULDERS, TRICEPS, LATS, BICEPS and in general an all over athletic ripped physique. 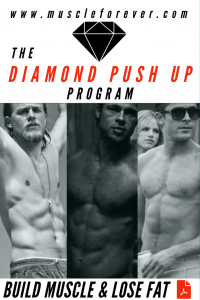 Simplicity, minimalism and progression is the key.

Will power is a limited resource – it’s not about doing 30 different exercises in the gym. My friends do that. They don’t look like Zac. More like Seth…Sorry Seth.

To start I would recommend 4 upper body workouts per week, such as the following.

Here’s the deal, if you’re overweight and have visible signs of ‘puffiness’, that’s to say you can see you’re round and can’t see your abs (because they ARE there!) then you need only do bodyweight.

As you get STRONGER and LEANER you’ll start to increase your reps – a great sign that you are making progress! Progressive Resistance Training/Progressive Overload should be at the core of ALL your workouts.

The goal here is to do 200 reps of pull ups and dips on alternate days. Throw in the direct arm work (Zac Efron’s arms are the stand out part of his physique) and you’re ready for that FRAT PARTY!

You could look like Zac Efron on the beach this summer by utilising the power of push ups and in particular the diamond pushup.

Praised by several established figures and often the sole exercise behind many a lean and muscular body (it’s at the core of all my workouts).

If you’re ready to get ripped and in great shape check out The Push Ups Program now!

Personally I think IF Zac had rocked the ‘Neighbors body’ in Baywatch it would have sat better with his character and the film.

His Baywatch body was simply distracting.

Despite his character being a swimmer we’re all wondering why he has a body fat percentage of ZERO, oh and a DIFFERENT FACE! If you’re wondering how to lose fat from your face, as you can see, as you lose body fat, you’ll also lose fat on your face too.

He would have looked healthy, in shape and let the character arc breathe had he had a typical swimmers body instead.

Such low levels of body fat can have negative hormonal consequences.

However, if you’re up for it, whilst you book a bulk batch of sunbed appointments I’ll run you through the Zac Efron Baywatch Workout.

Back, Chest and Shoulder development are key here. Again, direct arm work is essential as Zac Efron’s arms (biceps) are always the stand out area of his physique.

Each workout day involved super setting, so two exercises back to back with no rest in between! With this method Zac Efron would be burning more calories, getting a cardio workout along with pumping nutrient rich blood into his muscles.

The Zac Efron Baywatch Workout I’d recommend is the following, note it’s a Zac Efron Gym Workout but if you have adjustable dumbbells and a pull up and dip station you could do this as a home workout too.

When it comes to building ‘beach body arms’ push ups for triceps are KING!

Your triceps will get an insane workout with The Push Ups Program.

You’ll need to be in a calorie surplus (this is a very heavy bulking workout) with adequate protein intake. Talking protein…

For additional bicep and tricep growth I recommend the following arm specialisation routine for increased size.

Zac Efron typically did compound sets (trisets) which would be two or three exercises for the same muscle group performed back-to-back, with perfect form. The weights would be light but the pump, extreme.

The first seasons were in the morning lasting an hour and in the afternoon Zac Efron did another session! On top of this he did lifeguard training with the rest of the cast!

“He did more two-a-days than anyone I ever worked with” said Murphy.

For Zac Efron’s 12 Week Baywatch Transformation Patrick Murphy had him “implement an all-organic whole-food diet” and refereed to it as ‘SUPER DUPER CLEAN EATING‘!

For virtually the whole of the workout program Zac Efron’s diet was very low carbohydrate. When you go this low with carbs it starts to become more of a belly fat loss diet as Zac Efron would have moved into a calorie deficit as he started to lean down and get shredded for Baywatch. Let’s start with the king, the staple of all good clean eating plans – PROTEIN! If you want to get ripped like Zac Efron then you MUST have your nutrition dialled in.

Zac Efron’s diet consisted of the following foods that Patrick Murphy allowed him to have, I’ve included the carbs that Zac Efron was allowed presumably pre and post workout.

Zac Efron was allowed to drink unsweetened green/black tea too.

What’s your thoughts? When has Zac Efron looked his best? Personally I think the best Zac Efron Workout Routine is the ‘Neighbors’ look.

For Zac Efron’s transformation in ‘Beach Bum’ we can see a return to his ‘Neighbors’ body. In Beach Bum Zac Efron is rocking a lean, muscular and overall athletic physique, cutting back from his previous ‘Baywatch’ bodybuilder type look.

I’ve put together a daily workout for you to get the Zac Efron Beach Bum body ready for the actual beach this summer!

If you want to get in great shape and build a Zac Efron Baywatch body, ready for a slow mo run along the beach then all you need is The Push Ups Program.

I lost 50 lbs of body fat whilst building a lean muscular hollywood physique and now you can too with this men’s home workout.